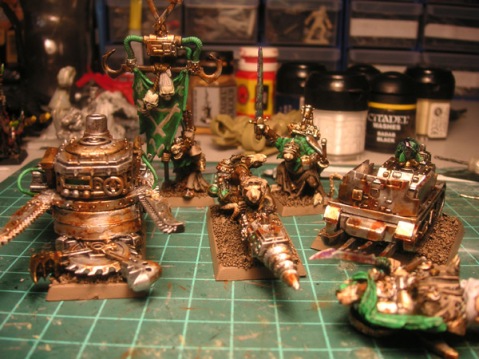 Added the details onto the miniatures. Painted a design onto the Battle Standard, as well as added warpstone lights to the machines. I also made both the Warlords hand weapons look ‘magical’, using thin watered down layers of Emerald Green and Amethyst Purple.

This is the Warlord glued onto the War-Litter. 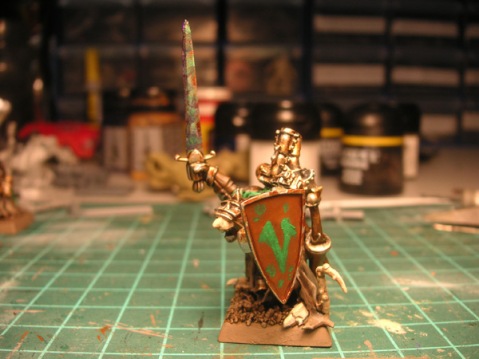 And the Warlord on foot, with his shield attached.

Put the Mithril Silver and Khemri Brown layers onto the latest batch of miniatures I’m painting. A layer of Elf Flesh followed this.

Next comes the Emerald Green layer.

Ropes, belts and pouches were picked out in Snakebite Leather. A Devlan Mud wash was applied to the flesh areas, with a Bedab Black wash over everything else. 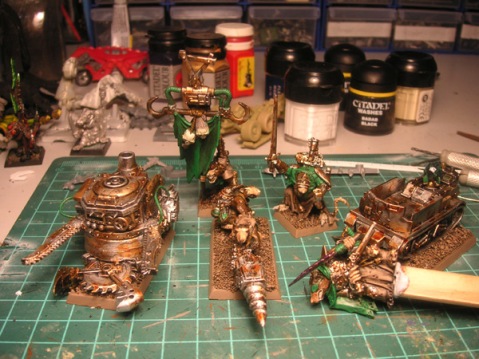 Then, a layer of Flesh wash to create rust, followed by a Dheneb Stone stone layer onto all the teeth, claws and bone items. Everything was topped off with highlights to the Khemri Brown areas, as well as the Emerald Green areas.

With this base level of application done I can begin to start work on the details. 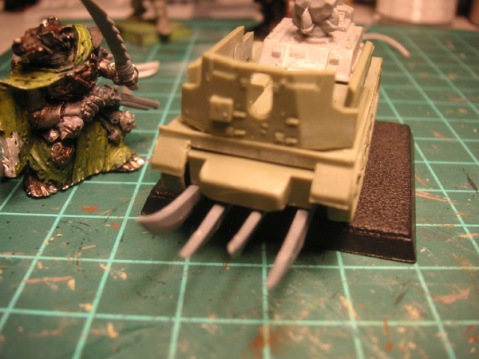 Just a quick War Litter update. Added some spikes to the front. Because, well, when hasn’t spikes improved something? 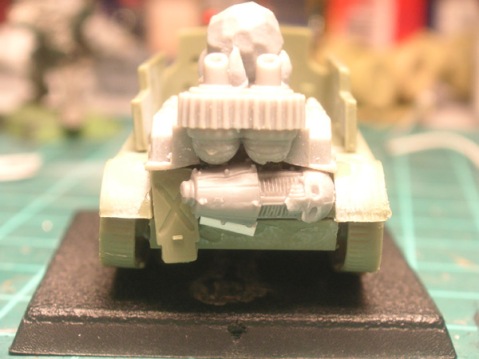 I also added to the back, creating sections of the engine using a plastic Plasma Pistol and an oil can. 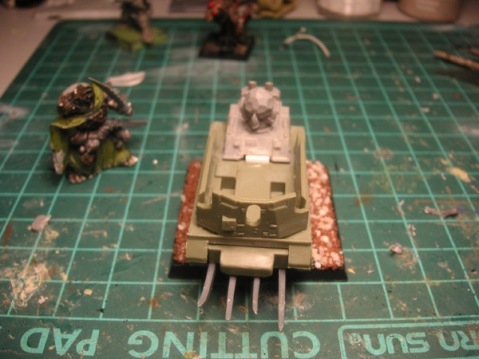 Glued it to a base and applied the basing material.

And here is the Warlord on it, sans gluing. I’ll undercoat and paint them separately, I think.

All that is left is to fill in a couple of the prominent gaps and then I can add it to the ‘to paint’ pile.

I dummied up a driver for the War Litter today, but I wasn’t happy with how it looked. It just looked too goofy. So instead I decided to change out the driver for a power source. 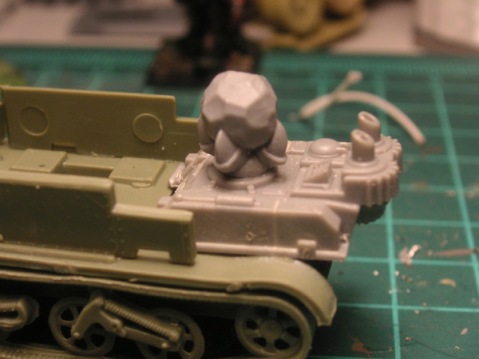 It is an Epic 40k Ork Battlewagon with its tracks cut off. On top I have stuck a warpstone chunk from the Plague Monk sprue. I just have to bulk out the underside now, so it doesn’t looks so much like a box stuck on top of another box.

Of course, I worked on the Warlord riding the War Litter too. Where the last owner had cut away the two-handed weapon, the right hand looked like it would suit holding a pistol. Initially, with the left hand, I was going to give him something completely new. However, good left hands are hard to come by, it seems. So I fell back on the original hand, trimming down the left over weapon shaft and using the end of a Clanrat spear as the blade.

The last owner had also cut away the tail, leaving only a short stub sticking out. To fix this I cut this nub off, clean with the cloth around it. I then used this flat surface to attach a sword from the Chaos Marauders sprue. While I was at it I also attached a shield to the Warlords back. What defence-conscious Warlord wouldn’t have a shield?

I picked this up for next to nothing the other week. It seemed like an excellent starting point for a War Litter. 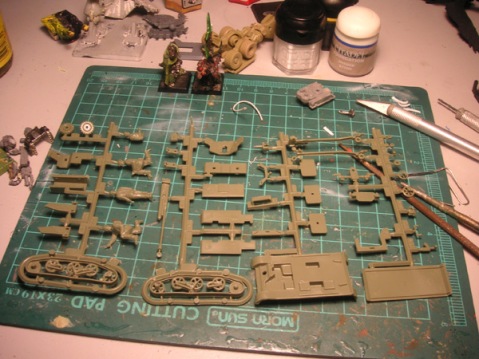 Obviously the scale is vastly different between the Bren Gun Carrier kit and Warhammer, but I am banking on that difference. Here we have the entire kit, though I will only be using a handful of the parts in the War Litter conversion.

I started out by doing a ‘dry’ test. Obviously, if the model wouldn’t fit onto the required base size, then that was no good. But as I expected, the Bren Gun Carrier body sits well on a standard monster base. 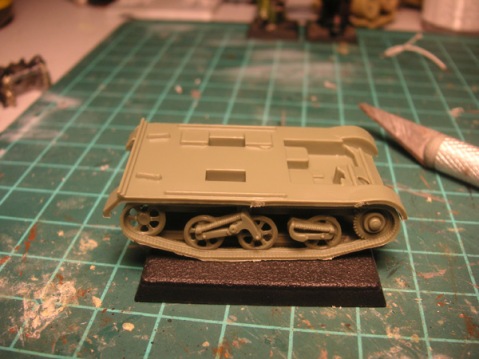 So I cleaned the parts and glued them together.

I also attached the first lot of armoured plating. This Warlord miniature is the one I plan on attaching to the War Litter. He seems to have the right pose, and I will just have to fix up his weapons. Behind him I also plan on adding in some kind of driver. Or maybe a bulky, unstable looking power source. I am still not sure.