Yet again the Chaos Dwarfs come marching from the blasted wastes of the Dark Lands. This time with issue 11 of The Word of Hashut.

The quality and presentation of The Word of Hashut has been of such a high level that I don’t even need to really critique it anymore. I can point out things that aren’t really working, or work really well, but as a whole the team seems to have it all together.

So what is in this issue that will be of interest to the general Warhammer player? Firstly, there are some really interesting Orc animosity conversions that you should check out. The individual conversions look great, and somehow work together as a cohesive unit. Impressive stuff.

The Golden Hat competition is also worth a look. All three models on offer are fascinating , and each speak to different aspects of the Chaos Dwarf fiction. It also helps that they are extremely well painted.

A special mention should go to The Forge of Hashut, an article dealing with my favourite game of all time, Warhammer Quest!

There is one unfortunate inclusion, though. An article on how to deal with Orcs and Goblins, right when a brand new Orc and Goblin book is about to hit the shelves! This isn’t a major problem, and work on this article obviously began a while back. It just makes the article seem a little, superfluous. On the up side, it does have an awesome illustration of a goblin shaman accompanying it.

Reading the editorial, it looks like the team have come to the same realisation we came to on Skavenblight Gazette a while back. While large, thematic issues are terrific, they are just a pain to organise, edit and produce. It looks like we will be getting a slightly slimmed down version of Word of Hashut from now on. And I am cool with that. The team behind The Word of Hashut has to keep itself fresh and energised, and if changing up the length and focus of the webzine means maintaining this, so be it.

I wish them all the best. 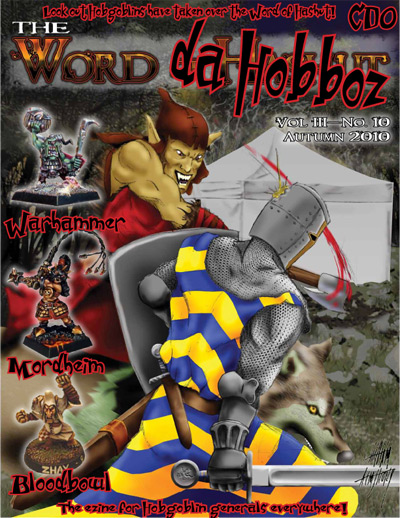 Look at that! A new issue of The Word of Hashut. Didn’t that sneak in under the radar.

Did you know one was out? I certainly didn’t. I came upon this by complete chance, while doing a little research for my special project. No fanfare. No hype. Just a quiet slip into the stream.

First point of order. This issue is firmly Hobgoblin themed. Obviously this is a bastardisation of the old White Dwarf ‘Black Gobbo’ concept. And if this was any other webzine I don’t think this idea would work. But the relationship between the Chaos Dwarfs and the Hobgoblins is such an interesting, and striking, one that it really works here. It is also good that this wasn’t just a visual takeover, but used as an opportunity to explore the facets of the Hobgoblin portion of the Chaos Dwarf equation. It isn’t just used as an excuse to slap ‘Hobgoblin-ised’ graphics over regular articles.

But let us get to the meat of the issue, shall we.

There is an interesting mix of articles. I think The Word of Hashut have certainly hit their stride and are managing to collect a  good range of interesting and informative pieces. I especially like the piece on the actual history of Hobgoblins. Not just their Warhammer background, but the real-world creation, inclusion and evolution of them in the setting. It is extremely well written, and possibly wins the award for most original and informative webzine article of the year.

Also of note, a helpful article on converting Sneaky Gits. It is written clearly, with images that are easy to follow. Though I did feel a little bit of horror to see a Plague Monk sliced up so.

I noticed that there is an increase in the original artwork, which is nice to see. There are some quite striking pieces in there, and I am glad that The Word of Hashut is building a stockpile of artwork it can call on.

As always though, there are things I don’t like.

While the webzines page design has been improving, there are still some odd decisions that creep in. Some articles have a black and white illustrated border, which looks good, except for when the article text overlaps it in the top left hand corner. Unfortunately to me, it demonstrates a lack of forward planning. There is a similar problem with the pages of The Slave Hurler, where the text treatment makes the article an uphill battle to read.

Also a problem, there are some articles with content spread over two pages. This would be fine if the file was hard-coded to display as a spread by default, but it isn’t. Also a possible issue, at least for me, setting the PDF to display as spreads put the wrong pages together. So for instance, the Cover and Page 2 together, so by the time I got to the articles spread over two pages, they weren’t together.

I also didn’t like that some pieces that required some explanation had none. Like the Chaos Dwarf preview models from Forge World, or the Artisans Contest. Not everyone who reads The Word of Hashut is necessarily going to be up to date with all the happenings on Chaos Dwarfs Online, so some kind of an introduction would be nice.

Overall though issue 10 is looking good. A nice collection of interesting articles, which is the main thing, with some good supporting artwork. It is also nice to see a webzine make it to double digits. Good work The Word of Hashut.

A little heads up. I’m not too sure if I jumped the gun a bit, but you can’t find issue 10 on Chaos Dwarfs Online. I was alerted to it on Issuu, so you can pop over there to download it. I will stick another link up here if it becomes available later.

The Word of Hashut – Issue 5

Here come the Chaos Dwarfs again. The Word of Hashut hits the streets again, so prepare yourselves.

I have to admit, these guys are picking up their game. The visual style has certainly improved in this issue, and so has the art selection. In particular I am loving the full page illustrated introductions.

They still persist with setting up the pages as A4 portrait and presenting it as double page spreads. If you are going to do that, you might as well just do it A4 landscape and be done with it. They are also persisting with running the same aged paper background throughout the entire thing, but at least it is used a bit more intelligently than normal.

Word to my C D homies

A couple of days ago, the forum Chaos Dwarfs Online released their third issue of their ezine, Word of Hashut. I’ve downloaded it today, and it isn’t too bad. It’s interesting, and the bulk of it is well set out. The miniatures and illustrations are pretty good too. It is definately worth having a look at. You might even pick up a couple of good painting or modelling tips.

I also continued stripping the Skaven today, doing about another 20 or so.