Added the details onto the miniatures. Painted a design onto the Battle Standard, as well as added warpstone lights to the machines. I also made both the Warlords hand weapons look ‘magical’, using thin watered down layers of Emerald Green and Amethyst Purple.

This is the Warlord glued onto the War-Litter.

And the Warlord on foot, with his shield attached.

Put the Mithril Silver and Khemri Brown layers onto the latest batch of miniatures I’m painting. A layer of Elf Flesh followed this.

Next comes the Emerald Green layer.

Ropes, belts and pouches were picked out in Snakebite Leather. A Devlan Mud wash was applied to the flesh areas, with a Bedab Black wash over everything else.

Then, a layer of Flesh wash to create rust, followed by a Dheneb Stone stone layer onto all the teeth, claws and bone items. Everything was topped off with highlights to the Khemri Brown areas, as well as the Emerald Green areas.

With this base level of application done I can begin to start work on the details.

This was all done yesterday. However, a certain puppy managed to chew through my internet cord right in the middle of uploading images. So things were put off by a day! 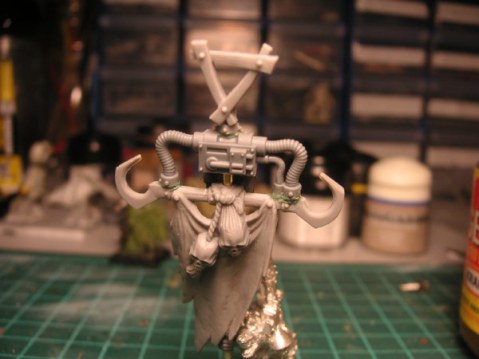 First port of call was filling in some of the gaps with greenstuff. Things were pretty seamless on the actual model, the plastic arm fits snuggly into the socket, and dripping out the hand means that filling in the connection here is unnecessary. All the work was done on the banner itself.

Nothing major, just filling some little gaps, completing the hose connections and generally making sure everything was tidy. Overall I am happy with its progress.

A slight oversight, though, presented itself. I realised I should have tried ranking the model up previously, and popped it into a unit to see how it went. As I suspected, the tail stuck out far too much, and messed with the rank behind. Luckily, because the model is metal, all I had to do was bent the tail around and the problem was sorted. 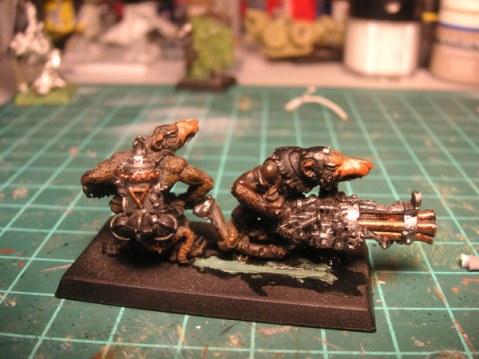 Since I felt like I was in the swing of things, I decided to knock up a Warpgrinder while I was at it. With the new Ratling Gun rules making them a little less effective, and with a slew of extra weapon teams, fielding another Ratling Gun seemed unlikely. So I decided to use this as the base for my Warpgrinder. 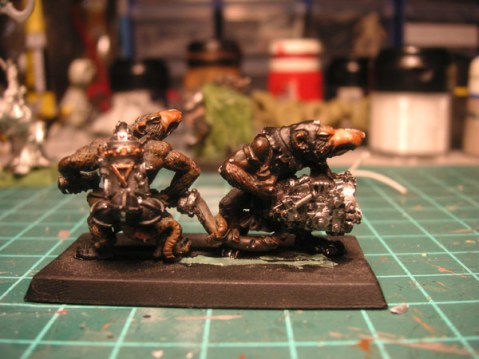 The first task being, sawing off the barrel. 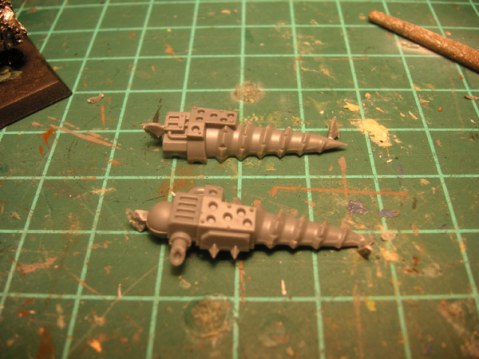 Which will be replaced with this drill from the Killa Kan box. I cleaned up the pieces, and sliced off the spherical hinge that attaches the drill to the arm.

I don’t trust the glue to hold the drill onto the metal all by itself, so I drilled out the end of the Ratling Gun as well as the drill. I then inserted a small length of copper rod to act as a pin. 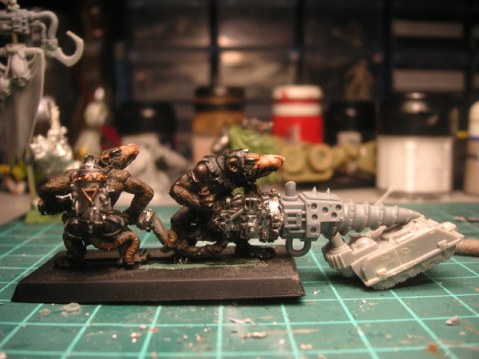 And there we have it. The Epic tank is assisting me in holding the drill up while the glue dries. I don’t want a saggy Warpgrinder! END_OF_DOCUMENT_TOKEN_TO_BE_REPLACED

Popped on over to Model Mania today and picked up some brass rod. So work on the Battle Standard Bearer can begin in earnest!

I took the drilled out the spear arm of the newer Clanrat and used it to measure up some Brass Rod. Then I cut it to size. Turns out, the ball joint fits nicely into the Warlock Engineers arm socket. Some plasticard rod was used to create a bottom for the pole.

The metal Warlock Engineer normally has a large, arcane backpack. This slots into a hole in his back. Since I wasn’t going to include the backpack, I used a pouch and sword from the Men-at-arms sprue to cover the hole. It fit snuggly on, almost like it was made to sit there.

And this is what is going to make up my banner. The Skaven crossed staves (yes, they are crossed staves. Did you know that? They also used to be the symbol for Clan Mors, but GW ended up appropriating them for all of Skavendom. That’s todays history lesson.) are from the last edition of the Clanrat box. The ragged looking banner is from the Chaos Marauder box, and the little machine is from the Killa Kan sprue.

I drilled a hole into the base of the crossed staves, the neck of the banner, and the top of the machine. This way they could all just slide onto the Brass Rod.

Slip them all on, and voila! One banner.

Green stuff will need to be applied to fill in some of the joins, and make the whole thing appear a little more cohesive. I also dug out an old Epic Ork tank turret, snipped off the barrels, and then drilled out the left over stud. I then glued this to the back of the banner, and inserted a wire that ran into the bearers backpack. I guess this is why no-one can just pick the Battle Standard up if the Chieftain is killed. He’s attached!

Progress on the next edition of Skavenblight Gazette has been good. Most of the articles are in, and have been arranged on the layout. Hopefully everything else arrives according to plan, and we can get this issue out early July. Just in time for a new edition of Warhammer, and reams of redundant content!

Starting to put the finishing touches onto the Doomflayer now. Added the wires today, and used green stuff to fill in a few unsightly holes.

I also prepared the base, which you can see in the top left hand corner there. Hopefully it will dry by tomorrow and I can stick the Doomflayer on. Not that I can spray it yet. I need to wait for the green stuff to set.

So I decided to make a start on my Battle Standard Bearer. I have been ‘umm-ing and ahh-ing’ over how to do this, and today it sort of came to me. So I am going to use one of the spare metal Warlock Engineers I have as the base for the conversion. For his right arm I will build him a Battle Standard, using one of the new Clanrat arms as a starting point.

First job was to prepare the arm. I started by cutting away the spear as close to the fist as possible. Then I drilled out the hand, as seen above.

At the moment this is as far as I have progressed. I wasnt to do something impressive with the banner, so I don’t think the regular plasticard rod I use in these circumstances will do. During the week I’m going to have to go and pick up some brass rod. This should be much sturdier, and able to support a lot more weight.